If this is your first time to eat sushi, it can be overwhelming at the start. It will open up your palate in a whole exciting experience as it gives different texture and taste that will fully satisfy your hunger as it is hearty and filling. Sushi is one staple dish in Japan. Knowing a little bit of sushi’s history will give you a better appreciation and awe as this is not just a simple dish but it also comprises of a long history of tradition, art, and skills in making it. Fortunately, it is not too difficult to like and once you have tasted it you would begin to have the urge to keep on wanting more. Soon you will begin to develop what kind of sushi you like best or develop a preference like trying it with wasabi to give it a little kick or just go savoring its full flavor by dipping it in light soy sauce. Will it be enjoyable eating this kind of finger food with a chopstick or with your hands? 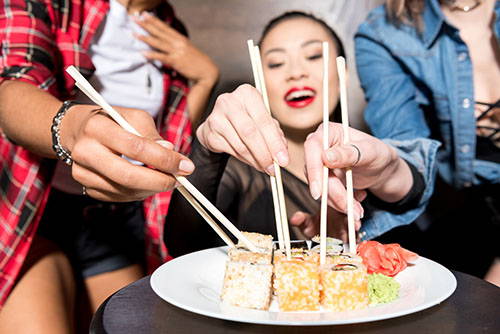 Although not everyone is expected to become an expert and know all the traditions behind eating sushi, it also won’t hurt to learn some behavior to follow on how to properly eat sushi as to enhance your dining experience and learn some cultural thing along the way. Here are some simple sushi etiquettes that are both fun and exciting to learn.

First off, if you want to have a great dining experience with ordering sushi, you should seat yourself at the front and center of a sushi bar. Once you’re settled and comfortable, you can ask the Sushi chef or also refer as Itamae on what he recommends. He would likely to recommend sushi that is satisfying and would highlight his creations. Professional sushi chefs studied for many years in sushi-making that’s why an appreciation of their long acquired skills will give respect to the generations of traditions. Never attempt to converse with the Itamae other than asking for his suggestions because he can be quite busy and handles sharp knives so better not to distract him and let him work. However, if you want to build a rapport with the chef, you can do so when he is already able to. Also, if your sushi eating experience has been an unforgettable one, it’s better to avoid tipping the chef because first, he works with his hands and should never touch money. Second, tipping is not customary in Japan so this is something to be careful about in doing. Just a simple “Domo Arigatou ” will suffice for appreciation. 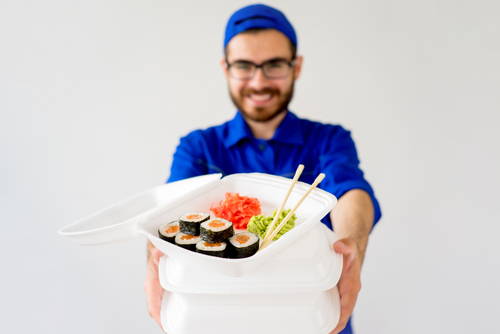 How to eat sushi

Every Japanese restaurants provide wet towels for each customer. Use it for cleaning your hands because traditionally the way to eat sushi is by using hands. The chef will provide an ample amount of wasabi beside the sushi. The wasabi better compliments the fish and the vinegared rice by dipping it slowly to the soy sauce and not by dunking the whole piece in it. Dunking the sushi to the soy sauce can soak up the whole thing that might ruin the rice and all you can taste is the soy sauce. To be a pro sushi eater, you can take the whole piece in one bite by placing it upside down with the fish touching the tongue and savor the taste by a slow chew before swallowing it down.

Giving some kick into your sushi doesn’t mean to add up a cloudy mess of wasabi into your soy sauce because it will kill the wasabi flavor and will not be able to provide that burn in your sushi. The right thing to do is to put a dab of wasabi directly to the fish and then dip it in the soy sauce so that flavors will come out to interact with each other. How much wasabi should you have on your sushi? Most Japanese restaurants provide additional wasabi for those customers who have an intense spicy palate. However, adding too much wasabi to the sushi will hide the flavor of the fish and you will miss the experience of tasting the mingling flavors of the fish and the rice. 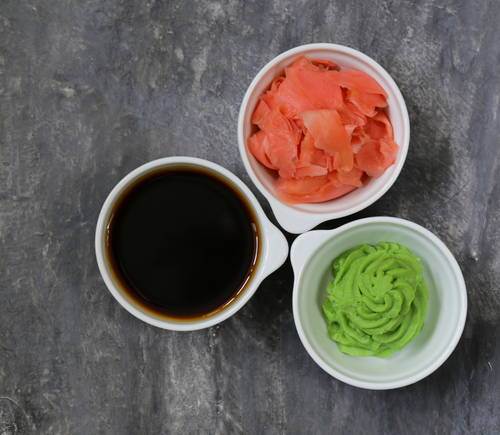 Eating in the proper order

According to an expert, the rule of thumb of eating the sushi in the right order is to eat first the lighter fish then the dark fish because lighter fish are less oily than darker ones so it won’t easily cover your tongue with fat. Fresh ginger is provided to cleanse your palate in between bites. The chef has a particular plan for how the sushi was arranged in a certain order. Start with the lesser oily fish like snapper then move on to a much oilier fish like salmon and finished off with an equally tasty tuna fish. The most important thing is to bask in the flavor of each sushi you eat. 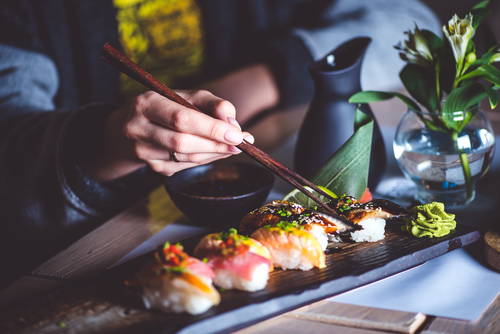 Now that you have tasted how delicious the sushi is and have learned some basics of how the right way to eat it, there are a couple of tips to remember after finishing your sushi. Offer a formal thanks by saying “Gochisosama” for a lesser formal way. If you have used disposable chopsticks place it back inside the paper bag and fold the ends of it or you can leave it in your table sideways and not pointing it to the person seated across you. Putting your chopstick beside the bowl will indicate that you are not finished yet. When payment time comes, do not hand over your money to the server or cashier instead place your money on the tray provided. If there are no trays, you can use both of your hands in giving and receiving change. As mentioned, tipping is not customary in Japan but leaving an extra wouldn’t hurt break the rule. 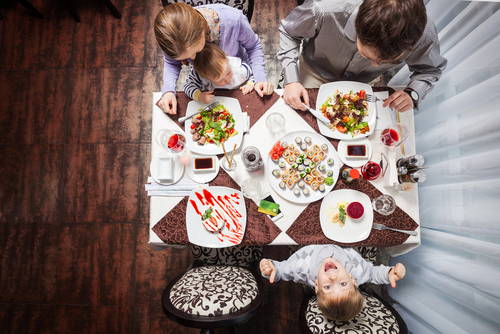 Learning the basic guidelines in eating sushi will add more unforgettable experience in your dining. It won’t make you an expert overnight but will give you emotional insights into eating sushi the traditional and customary way.